This past September I had the opportunity to make it to my second Vintage ComputerFest - Midwest. It was a great opportunity to not only see a lot of great hardware and software, but to also hang out with others that are as passionate about retro computing as I am.

The facility was a lot bigger this year, with three large ballrooms and a vendor area in the large hallway. My biggest complaint is the HVAC, two of the rooms were freezing while the third was barely comfortable. The PA was also a little annoying. 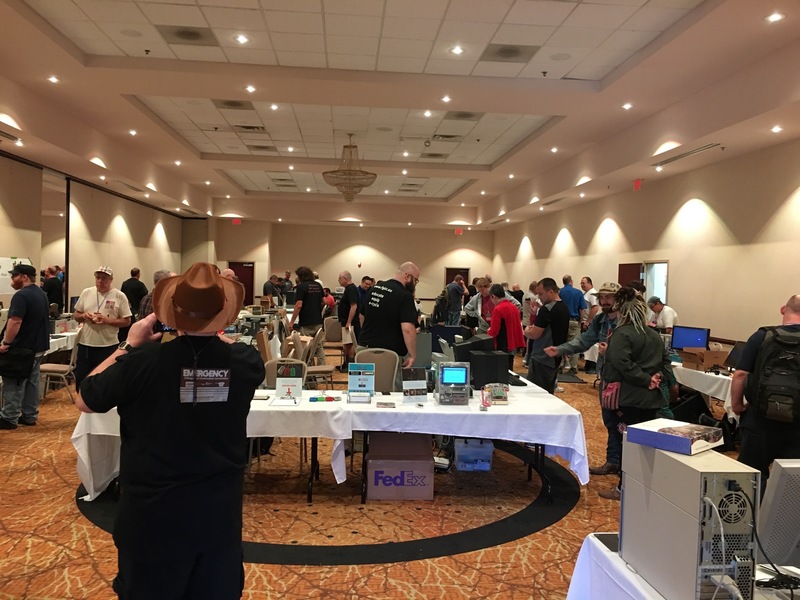 As soon as I arrived after my 5 hour drive I headed straight to the bathroom. But, after that, it was time to hit the Atari area. And the Atari area did not disappoint. MoparStephen had brought in a ton of Goodies, including an Atari800 with Incognito, an Eclaire XL, an 1088XEL and the greatest Atari 8-bit computer to date, the 1088XLD. The 1088XEL and 1088XLD are MyTek's re-imagining of the Atari 8-bit computer's motherboard. 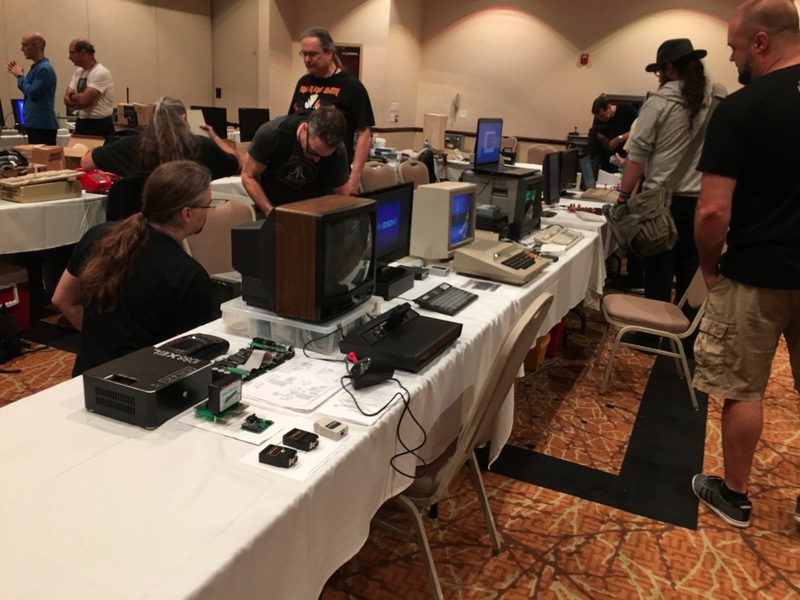 Slor was also there with a very impressive Atari display plus extras, with a couple of Tandy computers thrown in for good measure. I spent a lot of time play testing the new version of Atarinet.

The SCAT Atari user group had a nice set up, including some awesome sounding games and demos playing. There were also a smattering of Ataris through out the complex. I didn't do a count, but it appears that there were more Ataris setup than any other computer brand. 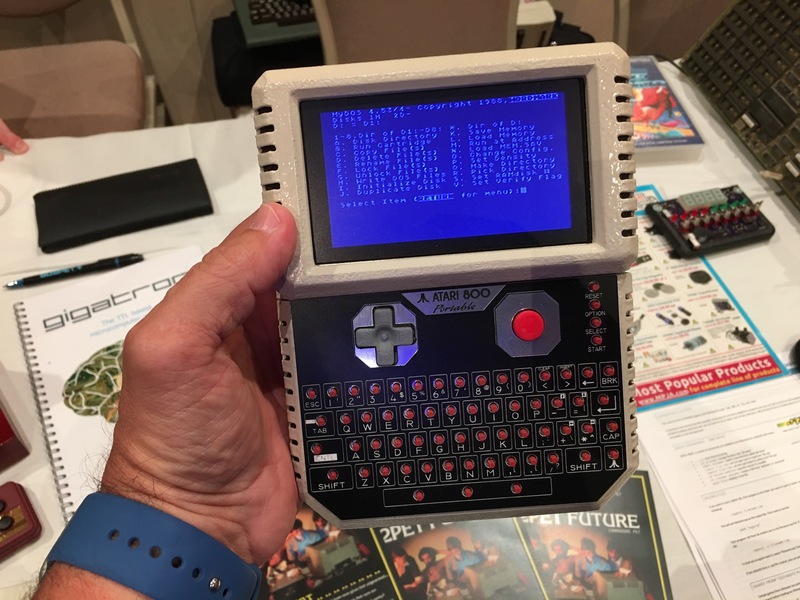 If you following the maker or building scene, you've probably seen Ben Heck's creation. Well, he was at VCFMW, and set up with the Atari people. He was showing off some very cool things, but the coolest was his newest Atari 800 handheld. I had missed his video when he originally built it, but I'm kinda glad to have been surprised with it. The portable Atari 800 works very well, and very fun to play with. Hanging out with Ben Heck was really cool too.

David Murray (The 8-Bit Guy) and the Commander X16 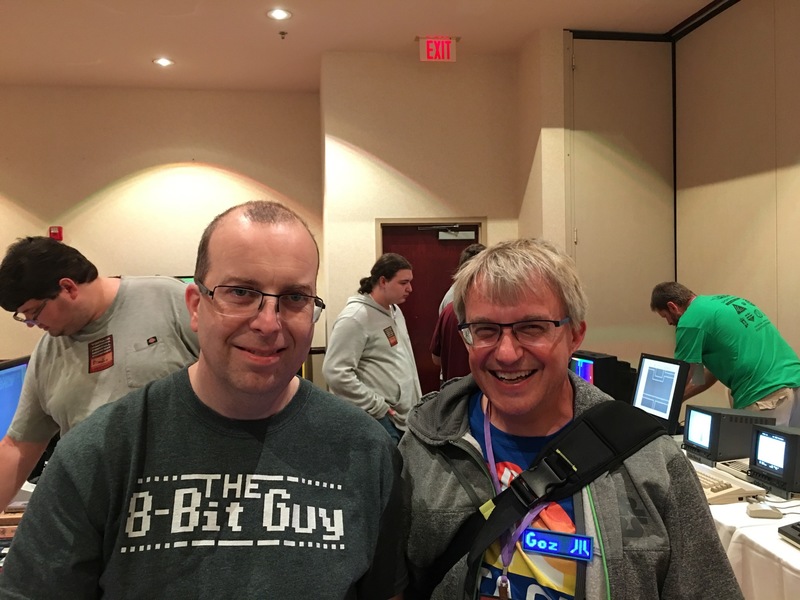 Also in the Atari area was the prototype of the Commander X16, the 8-bit guy's ultimate 8-bit computer. Even in this unfinished form the computer was pretty impressive, especially with what it was capable of at only 2MHz. I've already subscribed to his Youtube channel so I can keep abreast of Commander X16 updates.

I wish I would have gotten a chance to talk to him more, but he was understandably very popular.

The most surprising take away from VCFMW was the surprising lack of Apple II hardware. There were a couple of Apple IIs here and there, and a fully kitted IIgs, but nothing compared to what the Atari people were showing off. 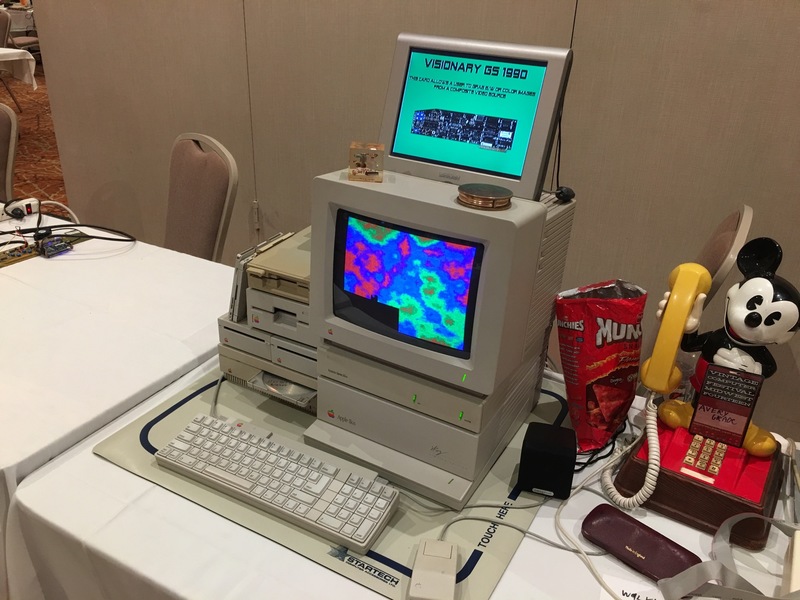 It was a really good time, and I hope I get a chance to go next year. If I do get to go, I'm going to bring some things to show off. What, you may ask? I don't know yet... Maybe I'll finally complete a game I would like to show off. :-) Or, something Apple II related!

I also took a bunch of photos and placed them up on Google Photos.