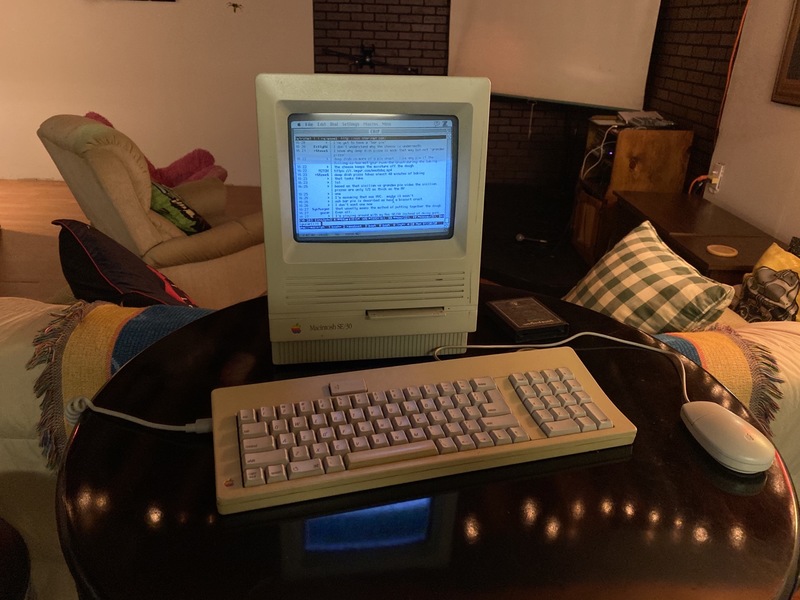 One of my goals for creating the CHIP wifi modem was to use it as a networking device with my SE/30. Today I tried it out as a modem. My first issue was the fact I didn't have any communication software on the SE/30. Well, I take that back. I did have something in Microsoft Works on the machine, but it's not, shall we say, full featured.

After some quick research, I came across Zterm. Getting it to my SE/30 required the usage of another Mac. I downloaded the .sit file with my Windows machine and copied it to a floppy disk. The disk then went in my 20th Anniversary Mac. From there I uncompressed the sit file and put the resultant folder on a Mac formatted floppy. Finally, I took the floppy to my SE/30 and copied over Zterm 1.0.1. Originally I tried the 1.1beta version, but it wouldn't launch on my SE/30. I'm assuming it's something to do with System 7.1.

Using Zterm has been amazing. I switched the terminal emulation to VT100, and the only screen corruption issues I've had is when smart quotes or unicode is shown. That is to be expected. I can use tmux and Vim without issue. In fact, this article is being written with the SE/30 under Vim.

If you want to use a classic Mac online, then making a wifi modem and using Zterm is a pretty powerful combination. This set up does require some comfort at the command line so you can do stuff online.