Another week at home, another retro terminal to work from, my 128MB Macintosh SE/30! 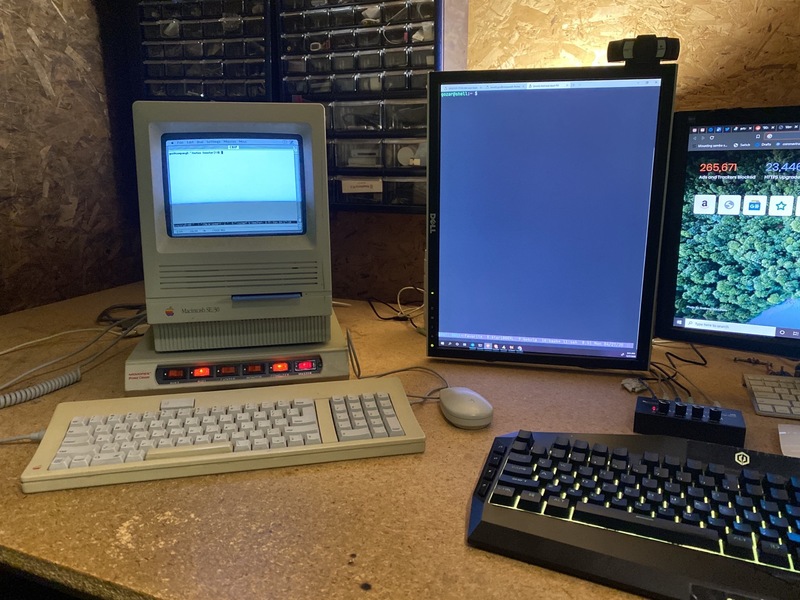 I've talked about this bad boy a lot in the last few months. It's such a workhorse, and everytime I get on it I'm transported to 1990. The terminal I'm using is Zterm, which works incredibly well. I haven't had any issues with it as a terminal to a Linux box. On the Linux box I use tmux as a terminal multiplexer, and it just works with Zterm's emulation. Emoji and unicode characters cause a little screen corruption, but that's understandable.

For writing, I use Vim for everything, so I'm not missing anything writing on the SE/30. In fact, this article is being written on the SE/30. I've thought about downloading the files, working with a native editor, and uploading, but that seems like a lot of work. That being said, I need to do it or I risk giving up my Geek card!

I used Zmodem to download this blog post and continued editing the file in Microsoft Word 4.0. I haven't really explored word processors for System 7.1. I can't remember what I used back then... ClarisWorks maybe? It's amazing how I don't remember a lot of the software I used on my Powerbook 100. If I could get it to start I could check.

Editing the document in Word and sending it back over to Vim worked better than I thought it would. Only issue was the first time I saved it I didn't change the format to text. After I did that, the file transferred fine.